Thank You For Sharing! 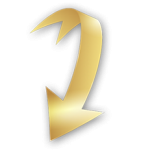 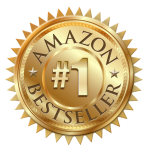 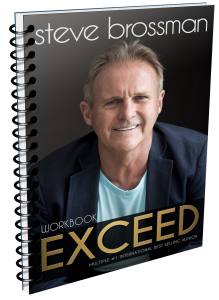 ABOUT THE BOOK | AUTHOR | BOOKING STEVE TO SPEAK

Aiming for the stars, but settling for the moon, is a cop out. It’s like accepting 2nd prize when you know you could have won the gold medal. It’s time to step beyond mediocrity and exceed your own expectations… Ready? Let’s get started…

EXCEED the book, is a real and raw look at how Steve Brossman has overcome obstacles and setbacks to achieve far more than he ever was told was possible. Who’d have thought a young boy with bent legs, nicknamed “bumblefoot” would go on to become Australia’s youngest National Professional Track Champion.

When he was training for the Olympics, he had a catastrophic experience that changed the course and direction of his dreams forever. It was through this journey that Steve discovered the 6 Principles that has not only shaped his own success story, but also thousands of those he has mentored over the last 40 years.

Within the pages of this book, Steve outlines these 6 Core Principles and how you can implement them into your own business and life with immediate impact and momentum.

Steve will also reveal his champion EXCEED Slingshot Effect. His #1 secret to fast tracking your results using Physiology, Psychology and Goals Setting from a totally new perspective. It’s time to start exceeding your own expectations. Grab the book and free training above and I will see you on the inside.

Steve is a former National Professional Track Champion and is the Author of two Amazon No. 1 Best Sellers ‘Stand Up, Stand Out or Stand Aside’ and ‘The Authority Client Attraction System”.

Steve has coached Athletes to Olympic Level and consulted others to medal and premiership winning teams, in a variety of sports .Steve was also the First Non-American to be awarded International Fitness Instructor of the Year.

With over 20 years TV and video experience, including hosting and producing his own TV Show on Ch 9, as  well as an Executive Producer for Warner Bros. Steve has appeared on TV in 5 Continents and is one of Australia’s most experienced video presenter trainers.

Spanning his 40 year career, Steve has created several 6 and 7 figure businesses of his own. Including franchising a kid’s club into 5 Countries and inventing and marketing an environmental product, selling 4 million units into 26 Countries.

Steve has spoken in 15 countries and trained over 45,000 Entrepreneurs, Professionals and Business Owners helping them Stand out in their market.

Recognised as personal impact influencers, Pam and Steve were invited to a high-level mastermind with Sir Richard Branson, on his own Necker Island, which was a life changing experience. Steve’s personal mission in life is  to..

“ Help people EXCEED their own personal and professional expectations, through innovative strategies, inspiration and support.”

The EXCEED book also comes with a simple Workbook to help you implement the 6 EXCEED Principles into your life and business immediately. Included in the EXCEED Workbook is:

Steve talks you through each of the 6 Principles including how to integrate them easily into your life to create momentum using the Slingshot Effect, to break through your goals.

The workbook includes action steps that go with every principle, to assist you in implementing these principles easily into your business and life daily.

This planner will help you keep on track each day with your wins, your goals plus, taking action implementing the principles.

Helping clients get results in their business quickly, using my Client Attraction System, is my passion. There’s nothing more rewarding than helping small business owners catapult and exceed their own expectations. Here are just a few recent success stories…

“face2face now has 21 staff, I think when I first started working with you, we had about 8. We have gone from $5m in revenue to $20m in revenue and this year will bring in my best year ever for profit.

Kate Prior | Face to Face Recruitment

Doubled Our Intake of Clients!

“The results we have had over the last 7 months is phenomenal. We have doubled our intake of clients…. Anyone who wants to increase their clients, speak to Steve”.

My Dreams Now Envy My Reality!

All of this wasn’t going to be possible without you as my mentor Steve. You helped me create a 4 Step Blueprint that covers the whole process of running a successful digital marketing business. I am forever grateful Steve for your strategy, continued guidance and mentoring. I know I have said this before, but my dreams now envy my reality. Thank you, kind man.

Steve has international expertise on several speaking topics for your events, retreats, workshops or business in-house mentoring programs. He has spoken to over 60,000 people in 15 Countries often winning most dynamic presenter at conferences. Below is a brief overview of his paid speaking topics. Please use the contact form at the bottom of the page for speaking engagement enquiries and availability.

This is a humorous, yet inspiring, talk on how Steve continually beat the odds to exceed his own and other’s expectations.

From a kid born with bent legs to becoming the youngest National Professional Track Champion and  several years later, the first Non-American to win International Fitness Instructor of the Year.

Plus, a business story of how Steve invented an innovative butt litter environmental product built and turned it into an award winning 7 figure Multi- national company, selling over 4 million plastic butts into 26 Countries.

Steve has developed a 6 Principle formula to Exceed your own Personal and Professional Goals and will present that throughout his talk, showing how to create the “Slingshot Effect” to break through traditional goal setting that no longer gets results.

This Talk is Ideal for:

Opening of conferences to set the scene for breakthrough performances.

Amplify your Message, Influence and Persuasion

How to attract, convert and serve more high level clients.

How to achieve exceptional sales results by creating synergy, solutions and selling the system not themselves.

BOOK STEVE FOR YOUR NEXT EVENT

Looking for a dynamic, entertaining and polished interactive speaker for your next event, retreat, workshop? Or  perhaps you would like to book Steve to run a workshop on a specific topic for your company.

With over 40 years experience speaking to thousands of people around the world, Steve has limited spots available each month, as his calendar fills up quickly. To secure Steve Brossman for your next event, please use the form below and leave details including your best contact number and we will get back to you within 24/48 hours with availability.